Timings (How Fast Is It?)¶

In the previous section we have demonstrated that Genie generates partitions of high quality. Now the crucial question is: does it do this quickly?

Genie will be compared against K-means from scikit-learn [P+11] version 0.23.1 (sklearn.cluster.KMeans) for different number of threads (by default it uses all available resources; note that the number of restarts, n_init, defaults to 10) and hierarchical agglomerative algorithms with the centroid, median, and Ward linkage implemented in the fastcluster package [Mul13].

Genie, just like the single linkage, is based on a minimum spanning tree (MST) of the pairwise distance graph of an input point set. Given the MST (the slow part), Genie itself has \(O(n \sqrt{n})\) time and \(O(n)\) memory complexity. Generally, our parallelised implementation of a Jarník (Prim/Dijkstra)-like method [Ols95] will be called to compute an MST, which takes \(O(d n^2)\) time. However, mlpack.emst [CEL+18] provides a very fast alternative in the case of Euclidean spaces of (very) low dimensionality, see [MRG10] and the mlpack_enabled parameter, which is automatically used for datasets with up to \(d=6\) features. Moreover, in the approximate method (exact = False), we apply the Kruskal algorithm on the near-neighbour graph determined by nmslib [NBMN19]. Albeit this only gives some sort of a spanning forest, such a data structure turns out to be very suitable for our clustering task.

Let’s study the algorithm’s run times for some of the “larger” datasets (70,000-105,600 observations, see section on benchmark results for discussion) from the Benchmark Suite for Clustering Algorithms — Version 1 [G+20]. Features with variance of 0 were removed, datasets were centred at 0 and scaled so that they have total variance of 1. Tiny bit of Gaussian noise was added to each observation. Clustering is performed with respect to the Euclidean distance.

Here are the results (in seconds) if 6 threads are requested (except for fastcluster which is not parallelised). For K-means, the timings are listed as a function of the number of clusters to detect, for the other hierarchical methods the run-times are almost identical irrespective of the partitions’ cardinality.

Of course, the K-means algorithm is the fastest. However, its performance degrades as K increases. Hence, it might not be a good choice for the so-called extreme clustering (compare [KMKM17]) problems. Most importantly, the approximate version of Genie (based on nmslib) is only slightly slower. The exact variant is extremely performant in Euclidean spaces of low dimensionality (thanks to mlpack) and overall at least 10 times more efficient than the other hierarchical algorithms in this study.

Timings as a Function of n and d¶

In order to study the run-times as a function dataset size and dimensionality, let’s consider a series of synthetic benchmarks, each with two Gaussian blobs of size n/2 (with i.i.d. coordinates), in a d-dimensional space.

Here are the medians of 3-10 timings (depending on the dataset size), in seconds, on 6 threads:

By default, mlpack_enabled is "auto", which translates to True if the requested metric is Euclidean, Python package mlpack is available, and d is not greater than 6. The effect of the curse of dimensionality is clearly visible – clustering in very low-dimensional Euclidean spaces is extremely fast. On the other hand, the approximate version of Genie can easily cluster very large datasets. Only the system’s memory limits might become a problem then. 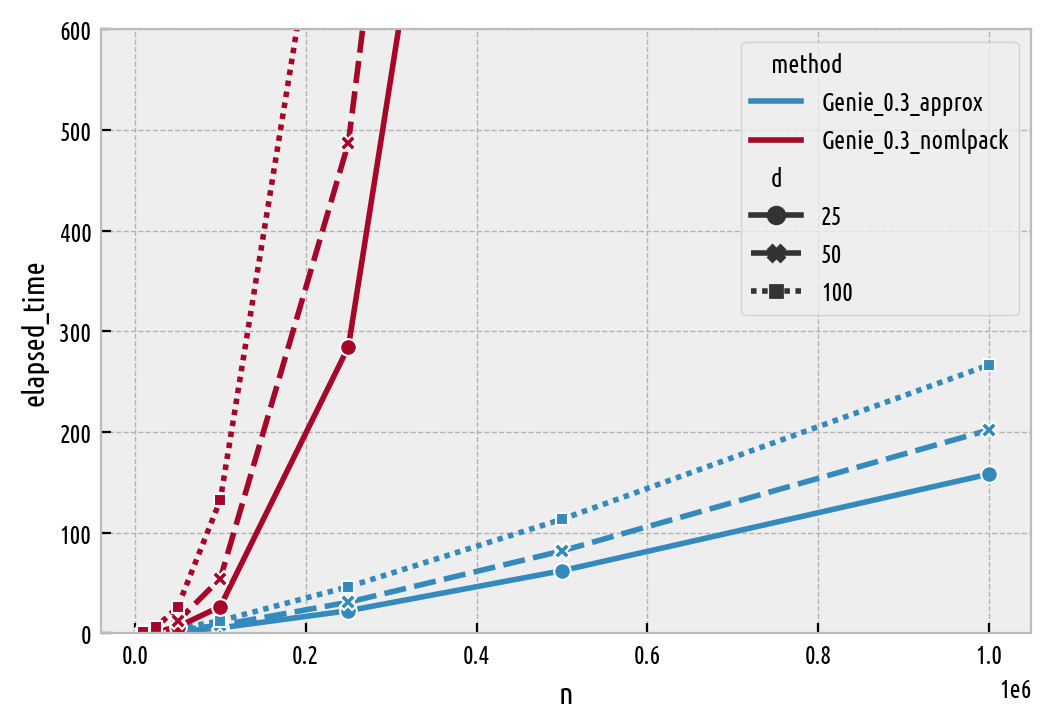 Timings [s] as a function of the dataset size and dimensionality — problem sizes that can be solved during a coffee-break.¶

Timings as a Function of the Number of Threads¶

Recall that the timings are done on a PC with 6 physical cores. Genie turns out to be nicely parallelisable — as evidenced on the mnist/digits dataset:

Timings [s] as a function of the number of clusters and threads.¶

The approximate (exact = False) version of Genie is much faster than the original one. At the same time, it is still highly compatible with it (at least at higher levels of the cluster hierarchy). Therefore, we can safely recommend its use in large problem instances. Most importantly, its performance is not much worse than the K-means method with small K. Once a complete cluster hierarchy is determined, partitioning of any cardinality can be extracted in less than 0.34 s on a 1M dataset. Still, even the exact Genie is amongst the fastest clustering algorithms in the pool.

On top of that, we are also allowed to change our mind about the gini_threshold parameter once the clustering is has been determined. The MST is stored for further reference and is not recomputed unless needed. Here are the timings for a first run of the algorithm:

Changing some parameters and re-running the cluster search: